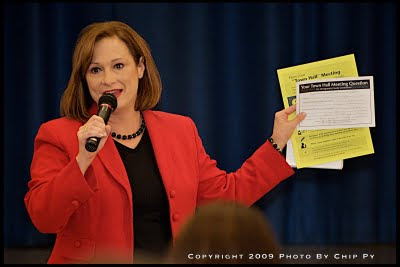 Congratulations on getting your very own music hall, East County! Hopefully the wait (which continues, after all, the thing hasn't even been built yet) is well worth it. Anyway:

- Who is the woman in this photo, taken by awesome photographer/friend of JUTP Chip Py at last night's Town Hall Meeting with Ike Leggett at Takoma Park Middle School? I wasn't there, but I know some of you readers were. And no, just because I work for the county doesn't mean I know who this is. Special prizes to whomever can convince me that their guess is correct.

UPDATE! Evan Glass, president of the South Silver Spring Neighborhood Association, says it's Alisa Parenti from County Cable Montgomery. Fitting that she would host a televised town hall meeting. Evan's prize is, of course, the gratification of knowing that he was correct and by being mentioned on an official Internet weblog. Thanks!


- Those living near the InterCounty Connector where it crosses Route 29 say they're losing sleep over late-night highway construction. We aren't hearing many complaints from the Tanglewood side of The Pike, but they're probably just happy that "criminals" from Briggs Chaney can't walk into their neighborhood anymore.

- The Glenmont Metro's getting its long-awaited second parking garage, adding another seventeen hundred spaces for commutes heading into Downtown Silver Spring and the District. Neighbors are concerned it'll bring more crime to the area, but WMATA says their planned Park-and-Rob garage has yet to be funded.

- Park and Planning's embarking on a new land use and transpo plan for the Route 29 corridor all the way from Downtown Silver Spring to Burtonsville, with a special focus on LifeSci Village and associated development in White Oak. Patterned on the recently-completed Georgia Avenue Corridor Study and the 355/I-270 Corridor Study, it'll set out a new vision for Colesville Road and Columbia Pike with, we hope, serious talk about rapid transit along the corridor. Work on the study should begin in 2011 and be approved by 2014.

- A new theatre's opening in the former Cinema 'N' Drafthouse at Wheaton Plaza. The Montgomery Royal will play first-run and indie films and have its grand opening some time in December, according to our sources at Westfield, the mall's owner. But really I'm just saying that so you can participate in the super-fun comment thread that started from Wednesday's post.
at 9:44 AM