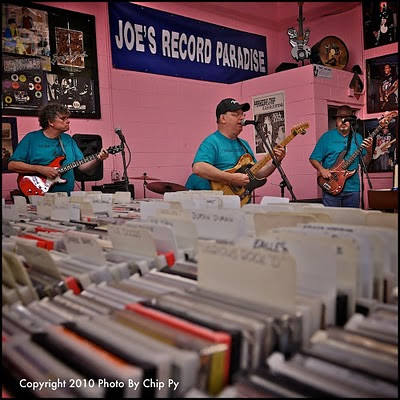 - TONIGHT is Blake High School's Comedy Night, with a performance by Baltimore-based hypnotist Jason Linett, an open mike, and a Last Blake Comic Standing competition They'll also have an open mike and a student stand-up competition with guest judges Linett, school board member (and former Blake parent) Phil Kauffman, and Blake alumni Dan Reed. Check out this preview of the student comics you'll see there.

The show starts at 7:30pm; tickets are $8, can be purchased at the door or online, and benefit the Blake PTSA scholarship fund. For more info, e-mail Jack Goble at comedynight at gmail dot com or check out the event's page on Facebook.

- And don't forget: tomorrow is the return of Fenton Street Market in its new, weekly iteration with dozens of new vendors. There's also a new addition called the Village Square, a sort of workshop led by local businesses and sponsored by the Peterson Companies, the good folks who brought you Downtown Silver Spring. This week, the Pyramid Atlantic Art Center will teach you how to do screen-printing. It all goes down from 9am to 3pm in the parking lot at Fenton Street and Silver Spring Avenue.

- Meanwhile, it's also Record Store Day, the "one day that all of the independently owned record stores come together with artists to celebrate the art of music," according to their website. Here in East County we've got THREE participating venues. There's Joe's Record Paradise - which hosted local country-jazz legend Chick Hall last weekend - and CD-Game Exchange, both located at Georgia and Ripley in Downtown Silver Spring, along with CD-Game Exchange's new store on Carroll Avenue in Takoma Park.

- Pacci's Pizzeria and new restaurant/brewpub Fire Station 1 will open within the next month, says SoCo Eats, meaning you've got two more reasons to venture south on Georgia Avenue. They're both located at Georgia and Silver Spring Avenue, on either side of the World Building.

- Meanwhile, Eric at Thayer Avenue went to 8407 with his wife and calls it "possibly the best restaurant right now in Silver Spring." What say you, Nacho?

Above photo from friend of JUTP Chip Py.
at 9:34 AM