what's up the pike: where's the star go on this christmas tree? 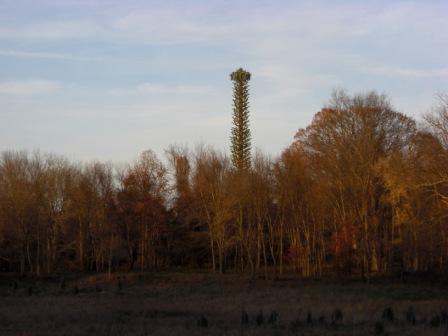 - Okay, so the Trolley Museum didn't actually reopen last Saturday. My bad. Though it did give Cyndy a reason to see the ridiculous cell phone tower disguised as a tree that's been put up next door. The museum, meanwhile, says they'll reopen whenever they can get one of their vintage trolleys up and running, but no date's been set. (Photo courtesy of Cyndy from Photo-Cyn-Thesis.)

- Tonight, anti-war group Peace Action Montgomery holds a candlelight vigil protesting the "escalation of war" in Afghanistan, where an additional 30,000 troops will be sent. They'll be meeting from 6 to 7pm at the corner of Georgia and Wayne.

- On Saturday, the Silver Spring Historical Society and Montgomery Preservation are holding an open house at the B&O Railroad Station. There will be tours of the restored train station, an exhibit on former station agent Robert Davis, a performance by the Seraphim Singers a cappella quartet, and rides from Thomas the Tank Engine for the kids. The event's from 10am to 3pm at the station, 8100 Georgia Avenue at Sligo. For more information, visit Montgomery Preservation's website.

- Later on, check out the work of Gandhi Brigade's young filmmakers at Youth Media Explosion!, a celebration on the media organization's recent output. The event, sponsored by Councilmember George Leventhal, will feature screenings of videos they've produced throughout the fall. That'll take place at 7:30pm in the lobby of the Lee Building, located right at the corner of Georgia and Colesville.

- Looks like next year's District 19 state delegate race is heating up, according to MPW. Three challengers have stepped up for the three seats for District 19 (see PDF map!), which includes Derwood, Leisure World and Kemp Mill. It's unclear whether incumbent Delegates Roger Manno, Ben Kramer and Henry Heller will run for re-election in 2010.
at 9:35 AM

They were hoping to open last weekend and they are still aiming for this weekend, but they told me even that would be optimistic. Thanks for featuring my silly photo of that silly "tree" or pipecleaner, as one of my readers describes it.