Whether to gin up support for the Purple Line, or to remind folks it's still being planned, the Maryland Transit Administration created this awesome video. I can't think of another piece of public transit, new or existing, as adorable as the Purple Line looks in this clip.

My favorite part? A brief cameo from Chompy the shark, shown in his natural state hanging from the Discovery Building despite going on hiatus last summer: 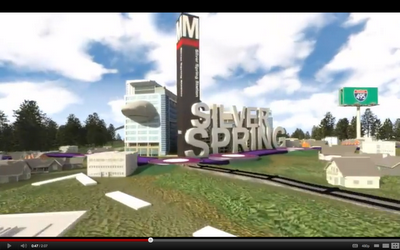 The video depicts the Purple Line and its major destinations in a cartoon version of suburban Maryland, in which houses are scattered helter-skelter across the landscape and giant words occupy the center of each town. (In Silver Spring, of course, they already do.) Naturally, liberties are taken with the Purple Line's route as well. Here it is scooting down what appears to be a cartoon Georgia Avenue: 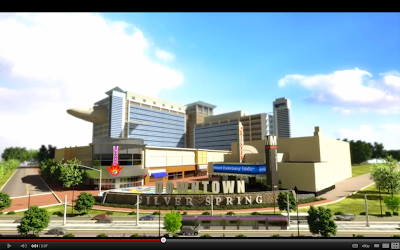 The actual Purple Line will go down Bonifant Street and Wayne Avenue in downtown Silver Spring, but there is talk about bringing D.C.'s proposed streetcar up Georgia Avenue into Maryland, so hopefully this will get people excited for that as well.

ANYWAY: I'd like to try an experiment with y'all. The other day, I was at Target on Cherry Hill Road and I saw a group of teenage boys performing a synchronized dance in and around a Cadillac Escalade with diplomat tags. I thought to myself, "Only in Silver Spring."


As of press time, there are only three tweets, two of which are mine. I'm looking forward to seeing what y'all come up with.

There are a couple of *really* tall buildings in the Bethesda cartoon. I'd be curious to know what the MTA knows about downtown Bethesda that we don't!

Once again the planners screwed up in the amount of damage a transportation project will cost. The Purple Line will destroy more homes, businesses and land than expected-When will the citizens learn-????