No doubt you've already seen the New York Times' map of Netflix subscriptions broken down by zip code, with all of the demographic analysis that followed. We want to see ourselves in our movie choices - or, more accurately, we want to judge others by the movies they watch. A noble goal, indeed. 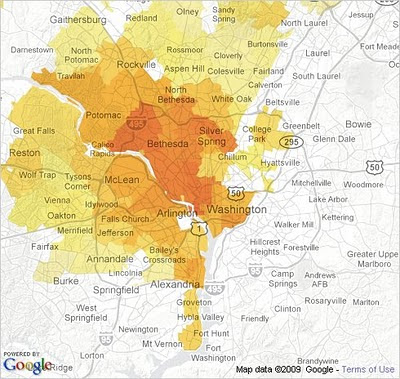 Map showing the popularity of foreign film Vicky Cristina Barcelona. Downtown Silver Spring and Takoma Park take after Bethesda and Chevy Chase, rather than other parts of Silver Spring.

So what can we glean from Netflix maps of East County?

- Below-the-Beltway renters favor the kind of serious, indie, or foreign films you might see at the AFI Silver Theatre. Milk, the biography of slain gay-rights activist Harvey Milk, was #1 in Takoma Park and #2 in Silver Spring's 20910 zip code, but only #13 in above-the-Beltway Burtonsville. Not surprisingly, the heavy environmental message of kids' movie Wall-E appealed to renters in Takoma Park (#11), but didn't crack the top 50 in Burtonsville.

- The Curious Case of Benjamin Button and Slumdog Millionaire topped rental lists countywide, except in Takoma Park (20912) and Bethesda (20814), where Milk was #1.

- Zip codes in rural areas with smaller populations had less consistent lists, either because the sample of renters was too small or because there's one person in Sandy Spring with bizarre taste in movies.

That's why in Sandy Spring (20861) melodramas like Australia (#2) and political movies like Frost/Nixon (#7) can coexist in the top ten. Or in Spencerville (20868), Lakeview Terrace (#6) and its red-state fears of suburban terrorism rub elbows with the Connecticut blue-bloods of Rachel Getting Married (#4).

- Along the future InterCounty Connector, where highway construction has left many broken promises and sleepless nights in its wake, romantic comedies like Nights in Rodanthe have taken hold. It's #14 in 20905 (Cloverly), #12 in 20906 (Aspen Hill) and #11 in 20866 (Burtonsville).

- Wheaton (20902) liked Twilight (#7) more than anywhere else on the east side, not surprising because it's the only east side zip code with a Hot Topic.

- East County doesn't seem to watch Tyler Perry movies, which didn't crack the top 50 anywhere except in Burtonsville, where The Family That Preys was #24.

Are more obscure films popular in Downtown Silver Spring because of its proximity to art-house theatres like the AFI?

What's most striking is that lists of the top 10 movies rented in 20910 (Silver Spring) and 20912 (Takoma Park) more resemble those in 20814 (Bethesda) and 20815 (Chevy Chase) than other zip codes in Silver Spring. If we wanted to make a gross, irresponsible, generalization, we could say that a revitalized Downtown Silver Spring has attracted educated, affluent people whose interests and values line up with our stereotypes of people in Bethesda, while everyone else has been forced to take refuge with their shitty action movies in places like Wheaton and Burtonsville.

Which is absolutely fine with me. I loved watching Liam Neeson shoot sex traffickers in Taken.
at 9:34 AM

Doesn't the Netflix data (particularly the map you show in the post) support the hypothesis that the movie preference split is really more north-south than east-west?

Vicky Cristina Barcelona fades in popularity the farther you go outside the beltway, both east and (Olney, Aspen Hill) and west (Rockville, Gaithersburg).

Maybe the reason we have a perceived east-west divide in MoCo (and I perceive it as much as anyone, probably) has more to do with the way our transportation infrastructure is laid out and the geographic barrier created by Rock Creek Park than anything else.

It will be interesting to see if the Purple Line changes perceptions of shared interests (economic, cultural, social) by tying east and west together more closely in the southern part of the county.

Yes and no. Demographically, the upcounty (Germantown and Gaithersburg) and east county (White Oak and Burtonsville) are very similar; i.e., they're not as affluent (and often not as liberal) as people south or west (in Bethesda). So depending on who you ask, it can be a north-south divide along the Beltway or east-west along Rock Creek Park.

Closer-in Silver Spring is becoming a grey area because demographically it's starting to look more and more like Bethesda, meaning the north-south divide would grow stronger. I would argue, though, that if Netflix existed fifteen years ago when Silver Spring was a less desirable place to live you wouldn't see artsy foreign films being as popular there.

Dan, it borders on the ludicrous to draw such inferences from such a limited database as "netflix customers".

If you had additional data covering film rentals from walk-in places such as Blockbuster or Hollywood Video, you might be able to defend your thesis, which appears to be "inside the beltway is cool, outside the beltway you're all inbred provincials agitating in the hinterlands and that's why you rented Paul Blart: Mall Cop".

Take my own example. I have just started using NetFlix because basically I got tired of dealing with jerks in a brick-and-mortar store and besides the convenience it's so much less expensive. Yet I also note that since Starz is running recent releases almost exactly when NetFlix starts offering them, my best use for NetFlix is to queue up film that is unlikely at best to ever be on Starz. This means that I'm refreshing my memory of the classics, as it were, or catching up with indie or art films because there's no other way I'm going to see them.

Also left out of your ruminations is the fact that you might be analyzing knock-on effects of changes in cable providers. Comcast's bundles, introductory or otherwise, differ from those that come with or are available from Verizon FIOS. My own observation was that people with Comcast were far more likely to have HBO as a premium bundle and FIOS customers more likely to buy the Starz bundle, with the main difference being that with the Starz bundle you get 3 times as many channels as with the HBO bundle. With Comcast it's about the same so if you're going to pay extra you might as well pay for HBO.

Also, HBO concentrates more on the most-recent releases of the biggest "hits", the same sort of thing that people would queue up on NetFlix. Comcast-and-HBO subscribers don't need to order Twilight from Netflix, it's already on. FIOS-and-Starz do need to make that order or they won't see it on cable until next summer.

Plus, fold in theater attendance stats and your conclusions start to carry weight. Until then, not so much.

Hardman may not be aware of the RCN bundle available in 20910 and other close-in areas. You get practically every movie channel available except for Cinemax. HBO, Showtime, Starz, etc., etc. are all included.

Robert, I was indeed not aware of that. However, since I really like having 20-megabit/sec FIOS connectivity for the servers I run from home, RCN isn't an option for me, unless perhaps RCN can match price for bandwidth, core router minimum hops, and static IP addresses in world-routable space. Um, I didn't think so.

It still doesn't change my argument that there's insufficient causality for Dan to straight out characterize personality and education and attitudes from looking merely at NetFlix popularity ratings.

Further, his assertion about Hot Topic being a likely cause for a high ranking of "Twilight" in Wheaton isn't supported by a comparably high ranking for the DVD of the first-season of episodes of HBO's series "True Blood". For some reason, that was rented via NetFlix only in the University districts of DC and inexplicably in Arlington. You know, places where they have actual Goths.

As for the people ordering Vicky Cristina Barcelona, that might have more to do with gender concentrations in specific localities than anything else, evidently it's a chick-flick to end all chick-flicks, though it probably gets low rankings for being released late in the year compared to the all-year-long availability of "Benjamin Button", a comparably chick-flickish release.

Hmm, whaddaya know. The mailman just brought my copy of "Full Metal Jacket". Not gonna be showing that on Starz for a while, if ever.

Once my present queue is done, I think I'll start intentionally skewing statistics by ordering soppy romances and art films. Oh wait, that's what's already in my queue, after all of the Pixar stuff gets watched.

I don't think using "Vicky Cristina Barcelona" is a good choice as an independent, intelligent movie to examine local demographics - Woody Allen is a pedophile still to many. Results will be skewed right off the bat by those who want to watch but would never do so publicly at a theater.